Growing up in Romania during the 80s and 90s of the past century (and with that – I feel ancient), Christmas was completely disconnected from religion, Jesus, the 3 stooges and what not. This was mostly because religion was prohibited in our communist land of plenty of nothing. Also, my parents had very different views on religion. And by very different I mean that my father is a militant atheist while my mother is a traditional orthodox. Opposites do not attract for very long, I can tell you that much.

Anyways, to me as a child of these paradoxical parents, Christmas was all about the following 3 things

As a grownup, Christmas is too much about getting stuff ready, buying things, traveling to visit family, EATING AND DRINKING like there´s no tomorrow. Sometimes I wish I could just steal candy and yell at people for hiding imaginary gift givers. And I would save Ghiță for sure! 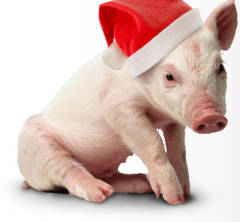